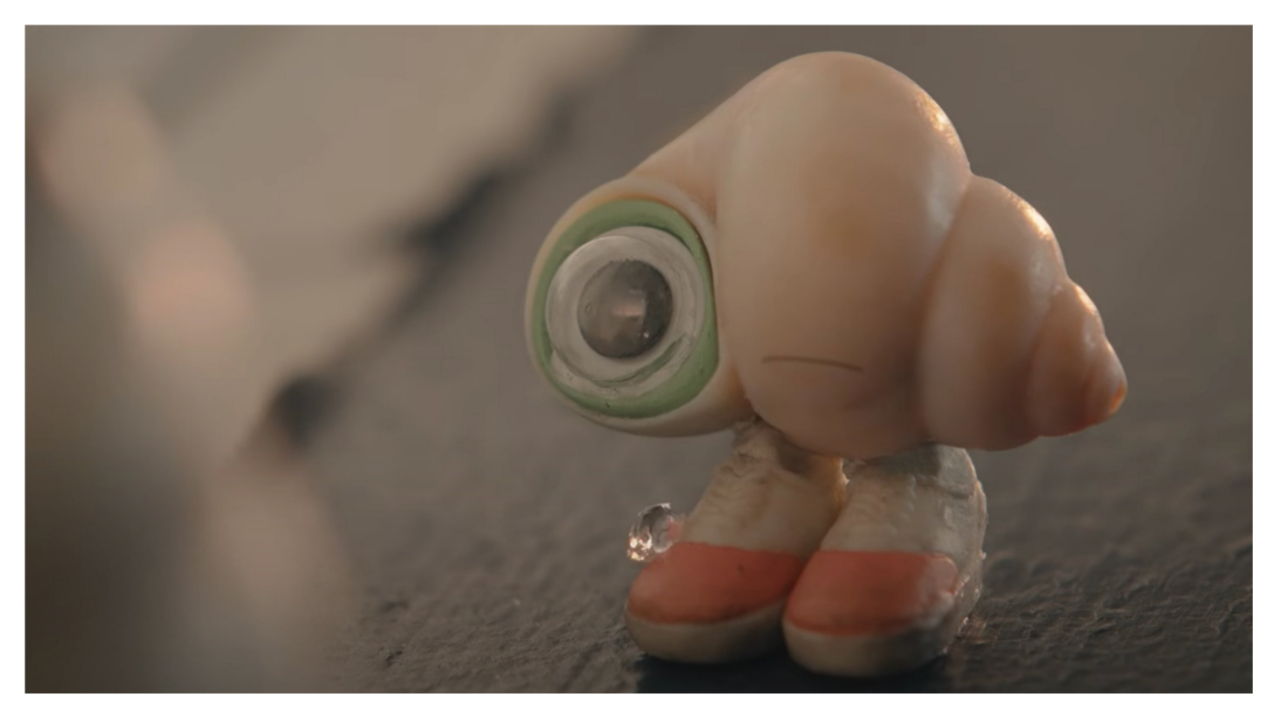 They say big things come in small packages, and that’s especially true for Dean Fleischer Camp and Jenny Slate’s stop-motion character, Marcel the Shell with Shoes On. The tender little anthropomorphic shell burst onto the internet in 2010 with a series of short films and quickly became a YouTube sensation. Now, over a decade later, Marcel is starring in his first feature film, directed by Fleischer Camp with Slate returning to voice the shell. The film is currently in theaters across the country.

But bringing Marcel’s miniature world to life wasn’t easy. We spoke to the film’s cinematographer, Bianca Cline, about the challenges of combining stop-motion with live-action filmmaking. As one of the few trans filmmakers working today, Cline considers it important to tell her story to a new generation of queer and trans filmmakers. She believes that her trans identity is not incidental to her creativity, but fuels her practice as an artist. Cline’s credits include Murder Among Mormons, belly of the beastand Oreo proud parenta short film for the Oreo’s Pride campaign.

The Mary Sue: How did you get involved in Marcel the shod shell? Were you a fan of the shorts or was it new to you?

Bianca Cline: It was totally new, I had never heard of Marcel before, and I got the script through my agent and as soon as I read it I was hooked. Although I will say there was no script when it came… there was finished audio, all dialogue, sound effects, music were all finished and then there were storyboards for it. ‘accompany, so I looked at it that way. It was kind of like a mini-movie, it was a very unique experience to come and see a movie but really lovely.

TMS: What difficulties do you face when shooting a stop-motion film? The process itself seems so laborious.

BC: The film is very, it’s quite unique, so the process was a mix of live action and stop-motion. We did it much like you would a movie with a CGI character, where we shot the movie in a house in Hollywood, where Marcel lives, and we shot it with a stand-in Marcel. We would put it on a stick or wires and move it across the scene, and we would work out what the lighting was supposed to be, where the focus was going to be, and we would get a reference of what it should look like.

Then we refilmed it without him, so we got a clean version, and then the stop-motion was done almost a year later, well it got extended because of Covid, and there’s a guy whose name is Eric Adkins (director of the stop-motion photography) who was doing the stop motion of Marcel himself, with the same lighting that I created on set, it matched the lenses that I was using, and then reintegrated Marcel into the live-action film we had shot. So we were constantly trying to figure out how to make it real.

TMS: What attracted you to cinema? Is there a movie or TV series that really made you want to explore this profession?

BC: When I was a kid I used to put on plays, and I was always interested in telling stories that way, and as soon as my family got a camera, I commandeered it and made it my own. , and I was filming whenever I could, and my mom said, “you know you could do this for a living?”, and it never crossed my mind, even though I grew up in Los Angeles. I always thought, you know, doctor, lawyer, engineer, these are real jobs, and I immediately thought, yeah, that’s what I’m going to do. When I was 16, I saw a movie called Immortal Beloved, and the photography was just beautiful, and more than that, it told the story of music and someone who can’t hear, and it was, it was the first time I realized what the cinematography can do, what it can make me feel. Like with music, you don’t have to say it directly, you can just feel it, and I think it’s my job as a cinematographer to make people feel things they’re not necessarily aware. This movie changed my life.

TMS: Since we’re coming to the end of Pride Month, do you have a movie you can’t miss for Pride Month?

BC: My favorite movie about gay people in general is either Beginners or a TV show called Veneno (HBO Max). Absolutely amazing, I love this show. It’s the best thing I’ve seen about being trans.

TMS: As one of the few trans cinematographers working today, what advice do you have for trans and non-binary people who want to work in the industry and find a community within it?

BC: It’s really a riddle I’m trying to figure out. I’m very surprised how few trans people are in the film industry, at least on the film crew, where I know most of my trans people. It seems like, and I think it’s a very open place for trans and queer people in general, so it’s surprising to me that there aren’t more trans people involved. I think maybe it’s just generational, because people my age didn’t grow up in a time when it was more acceptable or when producers were looking for people like us. I think those things are changing and I hope they will change again. I would say keep pushing. I think there’s this weird thing where trust breeds trust, and it’s hard to get trust without starting, but I think if you can fake trust a little bit, it starts snowballing and you go from there. And then it becomes real. Because you know who you are and you have stories to tell. And queer people in general have stories to tell!

Marcel the shod shell is currently in theaters. You can read more about Bianca Cline’s work on her website.

—The Mary Sue has a strict commenting policy that prohibits, but is not limited to, personal insults towards somebodyhate speech and trolling.—

Got a tip we should know? [email protected]