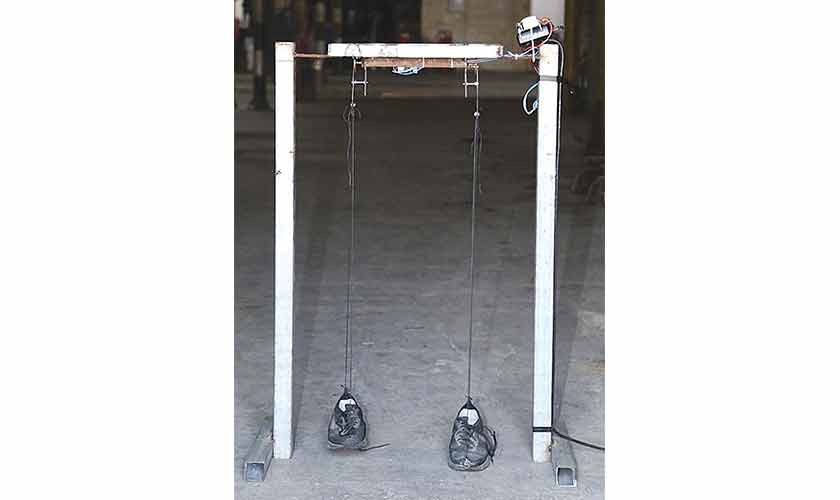 FFor many, the most irritating challenge is tying the laces in perfect agreement on both shoes in a pair. When you don’t, one foot seems to be firmly clamped while the other is held a little loosely. It is only on very rare and lucky mornings that one manages to achieve the desired symmetry. Otherwise, the shoe problem continues to stir its sole/soul.

One can also notice the existence of shoes in other ways. In art for example: Vincent van Gogh painted many still lifes depicting old peasant boots. Worn, dirty and deformed, these echoed the social condition of their users. There are a few other books dealing with this accessory. Several artists have also collaborated with shoe designers to produce unique, extraordinary and exciting shoes.

On January 30, we had another shoe experience seeing the work of 20 artists, created in relation to the product, premises, materials, facilities and labor of a shoe factory. This project, The Factory, was organized by Rameesha Azeem and supported by the Vasl Artists’ Association. It remained open to the public until February 7.

Not being a daily occurrence, it generated several points for reflection, including the relationship between art and industry; aesthetics and commodification; individual expression and mass production; and different understandings of function – as well as art and life (transporting us to another factory, Andy Warhol’s studio, which has diminished the boundary between a handmade object and a mechanically reproduced object) . Artists have responded to these and other concerns in their works installed in several locations around the factory.

Being surrounded by huge production halls, immense workspaces, raw materials, machinery and abundant manpower, one realizes the challenge as well as the stimuli these offer to an artist; especially for those used to working on a small scale, in a manageable studio and with familiar mediums and tools. Participants in this project revealed a variety of approaches; some have changed media but not imagery (Abid Aslam). For some, their regular practice has evolved in a new setting/context (Suleman Khilji, Suleman Faisal). A few have reacted to the place through the nature of the objects made there and the relationship between nature and man-made items. It was a laudable initiative offering artists the opportunity, space and inspiration to think outside the box and think differently.

“Out of the box” in reference to a shoe factory, logically, concerns the shoe box. We all love to collect and have played with shoeboxes as children. Mahbub Jokhio, in his Art for all – the most impressive work exhibited – took care of the box. (He was also referring to Warhol’s Brillo Boxes). Jokhio has created a line of empty shoe boxes printed with text that replaces, compares and combines contemporary art with shoes. The artist, using the idiom of advertising, described the Contemporary Art label, its ingredients, its qualities; and its manufacture for “the requirements of postmodernity”. He delineated its components in a chart that included critical thought, conceptual thought, contemporary discourse, postmodern critique, shock value, and political commentary.

Ironically, Mahbub Jokhio mixed a pair of shoes and a result of contemporary art, treating them as absolute/desirable abstraction (no shoes in the box, no contemporary artwork). The description on the box, mostly in Urdu, consisted of a diction that marries art writing with the classification of industrial goods. However, we feel that the artist introduced clues, which were probably not necessary, such as the name of his company, MJ Manufacturers PVT LTD, in a commercial area of ​​”Mahboobabad”. This type of entry transports fiction into the fantastic, therefore incredible.

Being there and surrounded by huge production halls, huge work spaces, raw materials, machinery and abundant manpower, one realizes the challenge as well as the stimuli that these offer to an artist ; especially for those working on a small scale, in a manageable studio, and with familiar media and tools. Participants in this project have used a variety of approaches to present their work.

Powerful and compelling fiction was produced by Ayaz Jokhio; a structure of two-string sneakers, moving as if jogging, with a mechanical device. No length was covered, not even “the distance of two feet” as the title suggests. The work indicates the futility of upward mobility, progress, struggle or achievement of another human being. In all of our endeavors, we are glued to our circumstances, limitations, and abilities. The phantom feet created by Ayaz Jokhio, move perpetually but arrive nowhere. It is the story of our private, political and national history.

Ayaz Jokhio’s shoes were like any other we encountered in a store, and identical to Saba Khan’s three pairs of shoes, stored in a display case. These parts looked no different from the factory productions. After being created by an artist, the fine line between an artist and a machine was evoked. A work of art also has a function other than aesthetic/decorative, as the shoes made by Khan were worn by participants of the “Pak Khawateen Painting Club” for their LB 2020 work.

Within the expanse of the shoe factory, the existence of an assembly line, ladder, equipment/help available was found to cause multiple reactions. Hassan Mujtaba piled up barrels and erected a passage, leading from one tower of chemical containers to another. After the initial fear, the experience faded. His collection of lit chandeliers hanging in a dysfunctional, dark factory hall, by contrast, seemed magical and transcended the real, ordinary space.

In the work of Faizan Naveed too, one recognized the measure of physical space and the extent of an artist’s imagination. In one installation, an uprooted tree hangs upside down, from its roots to its branches and leaves. It looked as strong and spindly as the corpse of a freshly scarred animal. He alluded to the haunting power and dispossession storyline – of a dark, desolate factory hall frequented by factory workers.

Some of the participants in The Factory project seemed overwhelmed with tools, technologies and the diversity of things. A few, however, managed to continue in their preferred – tried and tested – pictorial language. Mohsin Shafi installed 14 TV monitors on the walls of a workplace at different heights; each playing 3-minute segments of movies from the 60s with images of feet and shoes in different situations. This remarkable workIt’s show time, get your popcorn ready), forced the visitor to perceive cinema from another angle, and to read the social, sexual and hierarchical connotations attached to shoes in our cultural imagination. In its structure, the work was reminiscent of Shafi’s single-channel video Tasbeeh from 2011, which consisted of screenshots/stills of 99 TV channels looped with sound.

The foot and shoe fetishes suspected in Shafi’s work are understandable because anyone who appreciates our shoes is in some way in awe of our feet because there is virtually no void between the flesh and what is worn. In the case of a leather sandal, boot, etc., human skin is perpetually rubbing against the skin of a dead animal. Ali Baba captured this imperceptible gap, molding the space between the foot and the shoe in latex (space in between). This delicate layer, resembling both the human body and the commercial product, is a poetic reference to what is between the lines, what is often missed, trampled on and ignored, but yet exists.

The focus on subtle reality was seen in the work of Rabeya Jalil and Rabeeha Adnan mapping the interior architecture of a container. Lines of green light define the interior of a huge structure. Furthermore, the artist duo opened up the anatomy of an artistic practice: the language of art. In their installation on the wall of the factory, they put a long text, instructions, which imitated the advice that a student often receives from tutors. Ironic, intriguing and engaging, the presence of this perfectly fixed material in the context of a shoe factory made it necessary to find links/reasons. A pedantic connection could be in the word ‘footage’ of the 3rd section of the instructions; but the work can also be considered as a manual for deciphering art and life.

In employing the language, Dua Abbas also opted for another format. Instead of constructing an “object” in the conventional sense, Abbas produced a small booklet, a fable about an unnamed shoe factory worker who lost a foot. In the end, he received the missing limb from a “miracle worker”. The story, which oscillates between bodily loss and economic deprivation, is a narrative for our times. In addition to this, the title of the publication by Dua Abbas – available on the premises – Miracle at the assembly line can be a description of Chawla Footwear factory products.

The writer is an art critic based in Lahore.