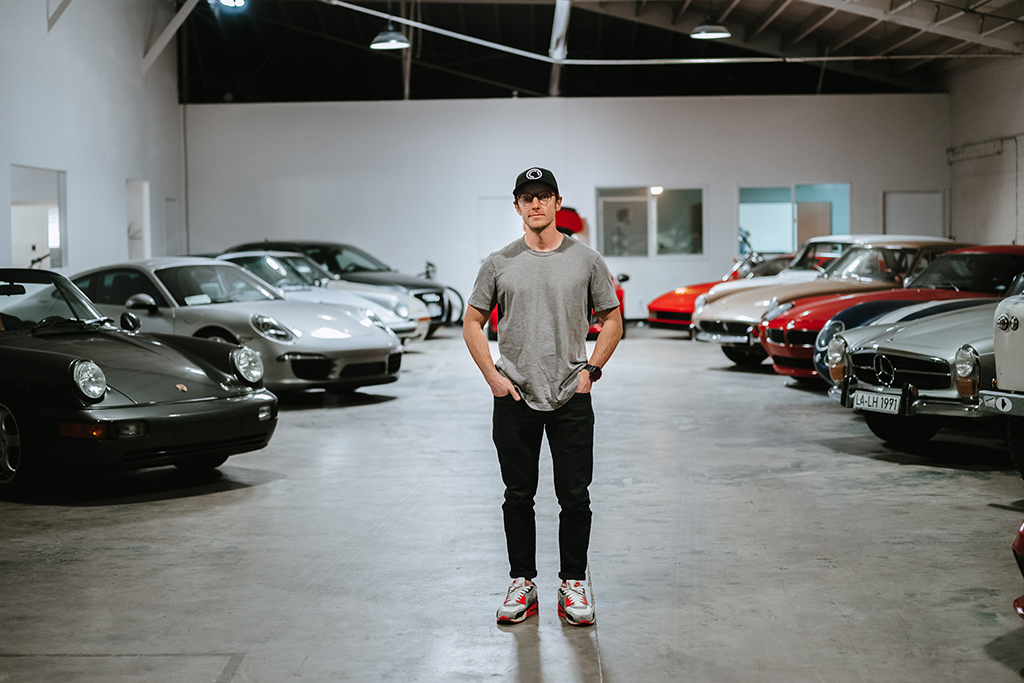 For FN’s latest coverage, G-Eazy conducted a conversation with Jeff Staple at the Motoring Club in Southern California, a coworking space for car enthusiasts. While the rap superstar and design icon are widely recognized as die-hard sneakerheads, Michael Rapetti, owner of The Motoring Club, is no slouch when it comes to kicks.

As photographer Justin Bettman snapped photos of G-Eazy and Staple surrounded by the dream cars of car enthusiasts everywhere, Rapetti cruised the Motoring Club floor in the Nike Air Max 1 “Safari,” a silhouette that he admitted to being an all-time favorite.

Rapetti opened the Motoring Club in Marina del Rey in 2019, having left a career in big tech which he admitted exhausted him. The Motoring Club, he explained, is the result of no longer wanting to sell products online and, instead, hoping to create a welcoming physical space – and with it a community.

“The concept was a casual, everyday meeting place for people who love cars, but without the stuffiness of a traditional car club,” Rapetti told FN. “At the heart of it, we are a social club for car enthusiasts. Members pay a reasonable monthly rate, and the goal was to keep it like a gym membership, something where we could have a variety of people, ages, backgrounds and make it more inclusive than a place with a higher price and a smaller community. ”

Looking ahead, Rapetti said he was working on a second location in Santa Monica. The space, which is scheduled to open in September or October, will offer a full cafe and retail experience. It will then expand out of state in 2023 and 2024, with plans to open in New York.

Below, Rapetti gives FN a sneak peek at his shoe collection.

How many pairs I own:

“It’s like 80% sneakers. The remaining 20% ​​are Chelsea boots, cowboy boots, moccasins. It’s funny, I wear them 0% of the time because I now work in a casual environment and live in LA”

The most expensive pair I own:

The cheapest pair I own:

“Vans Slip-On. I love them. They’re comfortable. They’re my kickers.

Where I buy my shoes:

“[Nike] Huaraches. Just got the new beiges, blues and oranges, like the OG ACG ‘Mowabb’.

“I love Reebok pumps, but they’re the least comfortable simply because there’s no ventilation. You sweat in it.

“Flyknit runners. Nike needs to bring them back.

“Any pair of Jordans because I’m afraid to wrinkle them.”

Favorite shoes to wear at the Motoring Club:

“Nike Air Max 1s. Growing up, they didn’t make kids’ versions, and when they came out, they were so cool. I’ve always coveted them, and ever since I was able to buy them, they’ve been my favorite sneakers.

Most often seen at the Motoring Club:

“Pickup trucks. It’s a California thing. You see them everywhere.

“The Air Max 1 x clots. I’ve never tried them on, and they’re obviously unique with the transparent toe box. I bought them, then A) they started underselling, then B) tried them on and thought, “I look so stupid in them.” Now they are just in the box.

Favorite trend of the day:

“Just that sneakers are becoming more and more fashionable. Years ago, I always convinced people that it was cool to wear nice sneakers even in a more formal setting. Now you see sneakers worn with suits and women choosing to wear Jordans instead of Louboutins.

“Super chunky soles. I feel like every brand trying to make cool sneakers, the soles are super chunky. Some Balenciagas are so huge, and Kanye [West is] making his huge boots. The stuff that’s just a little too futuristic is the kind of stuff where I’m like, ‘I get it, but it just seems a little crazy.'”