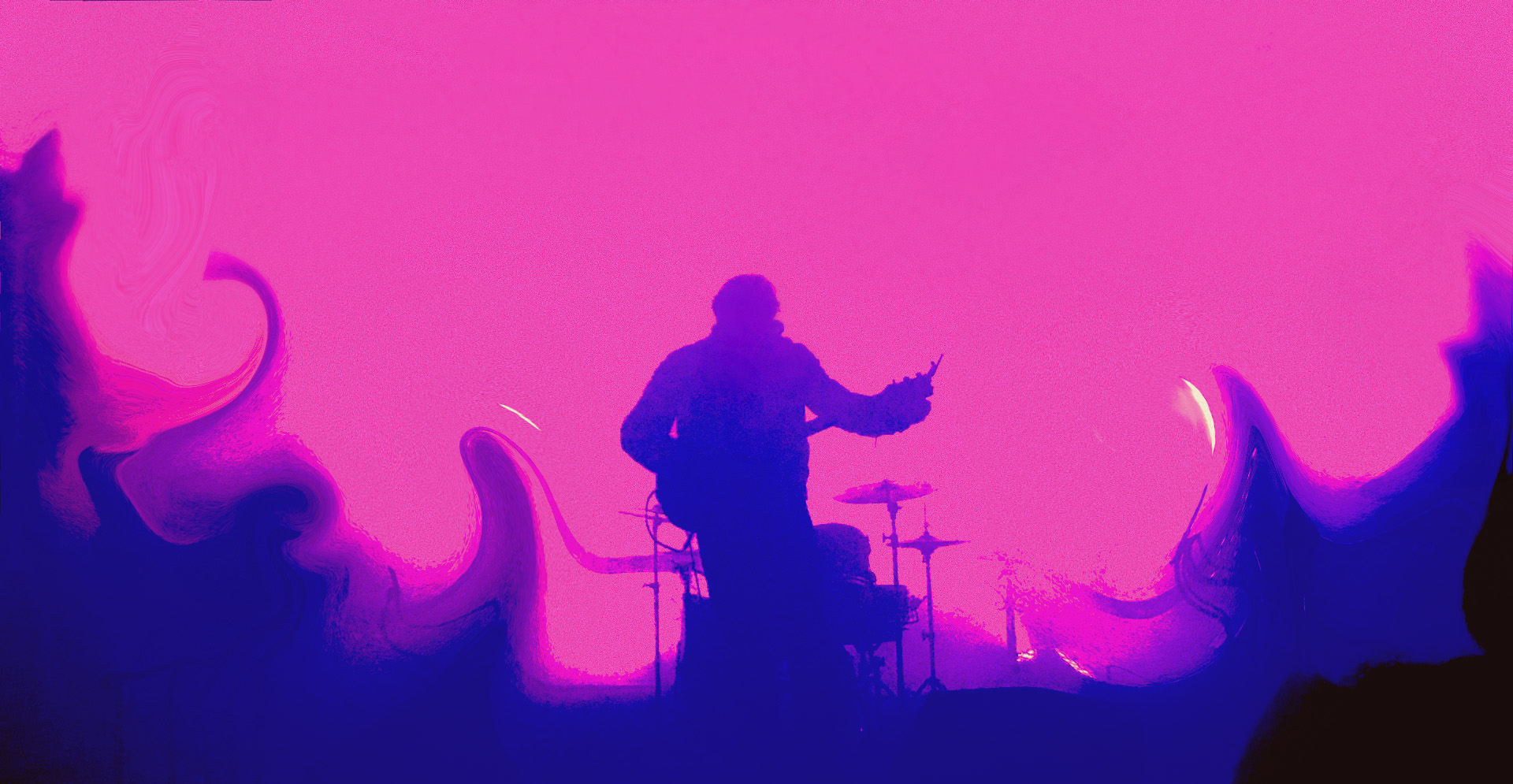 I wrote most of this article in 2019, but have come back to it many times over the past three years. There have always been details to add or an unfinished thought to develop. I never felt like it was really over. However, I have continually revisited this story, as I believe it gives an accurate glimpse into the mind of a child who desperately seeks respite from his own thoughts and ultimately finds it in music. Since the time of initial writing, the world has changed dramatically and so have I, with Current Joys achieving much more mainstream success, but an essential part of my youth survives in this story.

I sat next to my friend Aidan during our last class of the day, explaining my master plan. I told him how I saved an exuberant amount of money – $50 – packed a change of clothes, stole my brother’s MetroCard and printed the tickets. “Cool,” he replied simply, but I was still proud of my cunning. With class over and out of reach of high school, we pulled into the parking lot, where an ominous gray sky greeted us. A cool autumn wind made me button my jacket. We got into his car, driving through a drizzle who spotted the windshield.

The plan that night was a little different from our usual routine of playing Halo and driving to Wendy’s; we were going to a concert in Brooklyn. The band was Current Joys, a small indie band from Nevada that Aidan had found weeks earlier. He discovered the band through a random exploration of music videos on YouTube, and incidentally, they had a show coming up. I had only listened to a few of their songs at the time, but tickets were cheap and, at 17, I was eager to dive into the world of live music – although a growing feeling of dread was beginning to make my stomach ache.

We arrived at his house and changed into our school uniforms. I put on my thin bright red sneakers without taking into account the weather. I immediately wanted to set off for the city, but Aidan reminded me that the concert was in six hours and we could get there in two. I reluctantly agreed and spent the next two hours halfway contributing to the conversation and methodically thinking about the trains we should take.

After what seemed like forever, we walked to the station. While we waited Aidan told me to relax and it was going to be fun. We took the next train.

It was raining much harder now.

The four o’clock train was packed so we had to sit apart. Looking out the window, I saw the storm clouding the windows as the train rolled steadily south. I thought about how I had always wanted to do this. I had often imagined myself exploring the city and attending cool-indie-underground-rock concerts with friends, but fear continually held me back. My parents had always been restrictive and I was afraid of the big city that I knew little about. I was afraid of getting lost in the sprawling subway, missing the last train home, and then probably being eaten alive by rats. I was also terrified that my parents would find out about my deception. I had strategically left out that part of “hang out and come home with Aidan” which included a gig one night at school. Above all, however, an inexplicable fear of the unknown also dominated my consciousness at that age.

Despite these worries, my most powerful motivation for stepping out of my comfort zone was the feeling that there was a world outside of the one I knew and was watching from afar. A world that was outside the routines of high school and my hometown. A world full of excitement and moments that would make great stories. Looking out the window, I began to think that I was finally in the world I so desperately wanted to be in.

Eventually we arrived at Grand Central. We needed to take the subway, so we headed for the subway. Immediately and in hopeless confusion, we found ourselves in the middle of rush hour. Indifferent faces swirled around us as we struggled to navigate the overwhelming scene. We almost took the wrong train twice. I panicked because the map didn’t load on my phone, but after many directional pivots, we finally found the right gear and huddled together. I anxiously watched the stops go by, making sure we were heading in the right direction.

When we got above ground it was to pay. The streets were empty and the sky was dark. The only light came from the neon signs hanging from the stores. The rain soaked our clothes and weighed down my shoes.

We quickly tried to maneuver through the streets, wiping our phone screens with our sleeves to see the map. It took us to a deserted park that was so shady we couldn’t see where we were stepping. We got lost and what should have been a 10 minute walk turned into 30. Feelings of anxiety hit my stomach.

The storm never seemed to end.

We finally stumbled upon the place which, to our surprise, was a church. All we had before coming was the address. We entered hesitantly to find a man walking briskly across the pews. He informed us that the show didn’t start for another hour.

He showed us the bathroom. The only sensation I felt was one of deep unease. My soggy socks made every step a nightmare. We took off our socks and shoes and put them under the hand dryers. With a weight on our legs, we laughed at the ridiculousness of the situation. As we struggled to stretch our bare feet directly under the clothes dryers, a young man with baggy clothes, bleached blonde hair and rainbow Converse sneakers walked in. He was possibly the coolest guy I’ve ever seen. He laughed at us and complimented my sneakers; Finally, I breathed a sigh of relief.

Aidan and I sat in the church, and the discomfort subsided again. We finally did. I looked around and noticed the beauty of the church. There were tall vaulted ceilings, ornate stonework details, and narrow stained glass on the walls, drawing my gaze to an ominous circular window above the altar. All religious objects were removed from the altar and in their place microphones, guitars, drums and color changing lights were installed.

Gradually, people flocked. There were college kids, teenage stoners, and older couples who seemed to be quietly waiting for Sunday mass. Somehow everyone, coming from so far away and overcoming endless obstacles, had found their way to the show like we did – a miracle that still amazes me today.

Eventually the lights went out and I saw shadows of figures walking across the altar. The crowd cheered and then quieted down. My eyes widened. I held my breath. I heard the silent sound of a bass drum. It gradually increases in intensity and fills the church. Fast, distorted guitar chords burst out of the darkness. The lights came on. Lead singer Nick Rattigan stepped up to the microphone. Pink, purple, and blue lights illuminated it as thick smoke billowed from a side room. Gradually, only the shadow of a phantom musician could be seen. A ghost was singing in the fog.

Time seemed to slow down in this church. Nick continued his haunting lecture, and I recognized the man in the bathroom as the drummer. Music filled every crevice of my brain, bouncing from the ceiling into my ears. I stamped my foot and nodded, mesmerized by the emotion emitted by every movement, word, and facial expression.

They played “Kids”, a song dedicated to childhood mistakes. “Don’t listen to your brain / And follow your dreams,” sang Nick. His slow, raspy, buzzing voice struck me deeply. For a child who was worried about choosing a university specialization, the words were particularly relevant. His voice sounded desperate and he sang as if he wanted to be heard. He was singing as if the world was getting closer to him and he was running out of air. Mellow guitar riffs echoed from the ceiling as a steady drumbeat progressed. His hands moved with untraceable speed over the strings of his guitar. The music was heartbreaking. Deeply melancholic words from songs like “Blondie” entered my consciousness, spinning in my head.

The lyrics gave voice to the loneliness that had been buried deep in my chest, resonating more than anything I had heard in my previous 17 years of church attendance.

Nick struck up a light conversation between each song. He spoke to the crowd like old friends. He asked us how our day had been. He gave advice on Guitar Center’s return policy and couldn’t help but pun the preaching. His comfort and sincerity were quite apparent.

The band played songs that now have millions of streams for a room of 50 people. Many songs that perfectly captured the feeling of youthful energy and desire made me want to run and jump. The crowd was restrained only by the layout of the church. I am convinced that the energy of the song “My Motorcycle” would have invited divers if there had been a scene to dive from.

After a moving and inspiring set, Nick announced that the next performance would be their last of the evening. I knew this song from the first note – “Fear”. He told us to get up from our seats and gather around the altar. I snuck into the second row and caught myself thinking it’s a moment I won’t forget. I heard the words “It’s so hard to stop the rain” echoing through the church at the start of the song. The crowd was moving and people were singing:

Was it a catharsis? The song ended, Nick thanked the crowd, and we walked out of the church into the damp night in a daze. Was what we saw real? Was it really a Tuesday night?

After minutes of idling in awe, we suddenly realized how late it was and started running through the streets, trying to get the next train out of Grand Central. I felt light and couldn’t help but smile. I often think back to this moment and see it as the end of my coming of age movie. Fears of disappointing my parents, getting lost and missing trains evaporated. A scent of freedom and possibility wafted through the air. My shoes were dry. They were light. The fierce and uncertain battle was over.

The rain had stopped.